This emulator package uses the Emu48 Engine, a freeware for Windows 9x, ME, NT, 2000 and XP provided by Christoph Giesselink of GERMANY. The engine makes use of the original ROM Calculator, that can be extracted from the Calculator to run. We have package it to toggle between:

IDEAL FOR EDUCATOR AND TRAINERS!

However, this pre-pack Emu48 needs a ROM image to work. Because of licensing reasons govern by HP, ROM's aren't included, but they can be downloaded on several other sites.

Google for these files and drop them into this ROM folder.

How can I make a dump of my HP Calculator ROM? Emulators for the HP48 generally require an image of your HP's Graphic Calculator internal ROM, also known as a "ROM Dump". You can search the internet to download these extraction software.

Unzip the content into c:EMU48 folder and the double click EMU48.exe to run the program and select the KML Script: 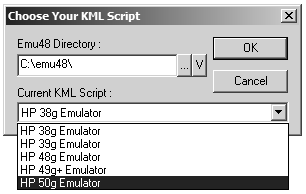 If you see this error message "This KML Script doesn't specify the ROM to use, or the ROM could not be loaded. Press Cancel to Abort." Then you have not properly install the ROM image. Remember to put the ROM images into the folder C:\EMU48\ROM.