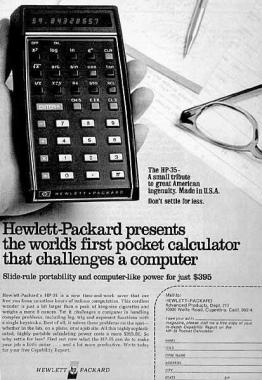 Caption: Hewlett-Packard presents the world’s first pocket calculator that challenges a computer. Slide-rule portability and computer-like power for just $395. The HP35 - A small tribute to great American ingenuity. Made in U.S.A. The HP 35, like all the HP Calculators that followed, was required to remain undamaged after falling three feet onto concrete on each of its corners.

which is based on the current HP 33s platform

and the style of the original HP-35.