Blaise Pascal was France most celebrated mathematician and physicist and religious philosopher. He was a child prodigy who was educated by his father. He worked on conic sections and projective geometry and he laid the foundations for the theory of probability. In 1642, at the age of 18, Pascal invented and build the first digital calculator as a means of helping his father perform tedious tax accounting. Pascal’s father was the tax collector for the township of Rouen.

Pascal attempted to put the machine into production for his own profit. This was not a successful venture, but it did result in a large number of units surviving to the present day. They are all slightly different in that they have different numbers of digits in the accumulator or haveslight differences in the internal mechanisms. None of the surviving models functions very well, and it is doubtful if they functioned perfectly even in Pascalâ€™s day. The mechanism, although ingenious, is rather delicate and prone to giving erroneous results when not treated with the utmost care. Some of them will, for example, generate extra carrys in certaindigits of the accumulator when they are bumped or knocked even slightly. 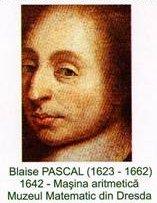