Diagram of a typical Chinese abacus set to zero - all heaven beads pushed up and all earth bead pushed down.

Heaven beads, each worth 5 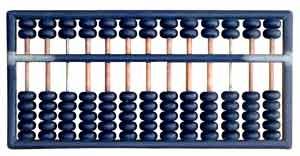 Earth beads, each worth 1

The Abacus utilizes a combination of two bases (base-2 and base-5) to represent decimal numbers. It is held horizontally with the smaller deck at the top. Each bead on the top deck has the value 5 and each bead on the lower deck has the value 1. The beads are pushed towards the central crossbar to show numbers. Working from right to left, the first vertical line represents units, the next tens, the next hundreds and so on.

Addition on the abacus involves registering the numbers on the beads in the straight-forward left-to-right sequence they are written down in. As long as the digits are placed correctly, and the carry