While serving in the French army, he built his first Arithmometer, which could perform basic addition, subtraction, multiplication, and division. Patented in France by in 1820 (two patents and two patents of addition in between 1849 and 1851). In 1848 Thomas restarts the development of the machine. It was manufactured from 1851 to 1915, it became the first commercially successful mechanical calculator and was still being used up to World War One (1915). 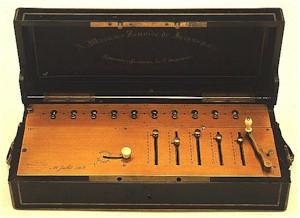 Thomas was made Chevalier of the Legion d’Honor for his invention of the Arithmometer. This is when he changed his name from "Charles Xavier Thomas" to "M. le Chevalier Thomas, de Colmar" and later simply "Thomas de Colmar". By the time of his death in 1870, his manufacturing facility had built around 1,000 Arithmometers since it was commercialization in 1852. At the time, the only reliable and dependable calculator enough to be used in places like government agencies, banks, insurance companies and observatories. The manufacturing of the Arithmometer went on for another 40 years until around 1914.

In 1819, Thomas de Colmar co-founded a fire insurance company named "Phoenix" which he left quickly because of the lack of support for his new ideas from his partners and shareholders. Ten years later, in 1829, he started the fire insurance company "Le Soleil" that he grew by merger and acquisitions until his death. In 1843 he started another company insurance called "L’Aigle incendie". By time of his death the "Aigle - Soleil" group was the biggest insurance business in France and he owned 81% of it!. Eighty years later, in 1946, it was nationalized and finally merged with "La National" in 1968 to become the GAN company which is still in business today